Please browse through our image collection below and on the connecting pages. All pictures are available to purchase.

Click on the small images to view larger versions.

Hart Photography Ltd. Was established back in 1958 by William & Mavis Hart. William was first introduced to photography while at school. One day a teacher entered the class room a said “if anyone is interested in having a go at photography raise your hand”. William raised his hand, he never knew why as he’d had no real interest in photography previously. Little did he know from this one small act photography was to become his profession. 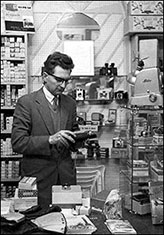 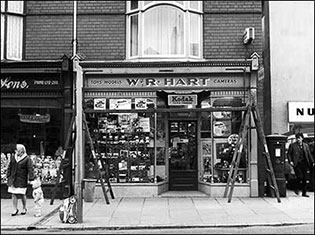 The Shop front and inside of W. R. Hart and Hart Photography Ltd. photograph taken in 1958

In the beginning the business couldn’t survive through photography alone. So, in order to make a living he sold photographic equipment, cameras, projectors, film & really anything photography related. In fact by the early 1970’s Hart Photography had become one of the largest sellers of cameras & equipment within the Midlands area. By this time the photography side of the business was also very well established. The studio was carrying out in excess of a hundred weddings per year, a large number of portrait sessions & many commercial assignments. William was also by now winning many awards within the industry for his work.

In 1977 Linton Hart joined the studio after attending Wednesbury college of photography. Apart from his camera work he showed a natural flair for retouching & was quickly involved in enhancing the portraits which William was producing. He also introduced a new service to the studio, which is photograph restoration and enhancement.

In the mid 1980’s Gordon Hart joined the studio. After qualifying as a glass cutter/designer at Stuart Crystal, he along with many others was made redundant. He was originally going to set up his own glass design/cutting business at the rear of the studio, however in the mean time he tried his had at developing and colour processing. He had a natural flair for this and quickly became the laboratory manager.

Also in the mid 1980’s we made a decision to sell the photographic retail part of the business so we could now concentrate purely on our photography. The photography side of the business had now grown to such an extent that we could now survive without the retail section. We purchased the two shops next door to the original business & had them converted into a double fronted studio. The whole of the top floor of one building was converted from single rooms, into one large room measuring over forty feet in length & twenty feet wide. This was to become the studio/camera room. Now one of the largest portrait studio’s in the West Midlands. 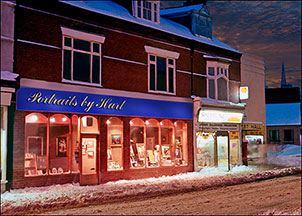 In 1988 we made the decision to cease photographing weddings & by 1991 we had photographed our last one. By this point we’d photographed in excess of 3000. Most of the weddings had taken place on a Saturday, to cover a wedding properly each photographer could only cover one per day. We found we were having to turn away so may studio sessions that the weddings were no longer viable. We could now concentrate totally on the Studio Portraits, which are our passion. At the same time we renamed the studio "Portraits by Hart". Our thinking was, the name says it all.

In 1994 William Hart retired leaving the running of the studio to Linton & Gordon Hart. Mavis however is still working to this day, looking after the book work and sorting out lunch for her two boys. Carole our receptionist also joined the studio at around this time.

In 2005 the studio changed from film to digital. This has enabled us to offer an almost endless range of styles, never thought imaginable a few years ago. They range from traditional to contemporary and even to fantasy art. These days if you can imagine the picture, the chances are it can be done. For many years Linton has been skilled in the use of the airbrush and can paint in his own right. Through the use of digital technology we're now able to bring a mixture of art and photography into one place. Being skilled in the traditional ways of retouching means we are much better equipped to take full advantage of the full array of computer based retouching & painting tools.

Everything from the photography, retouching & picture framing is done on the premises by Gordon & Linton. This means we have full control over the quality of our work.

From the camera to the wall Hart Photography does it all ………………